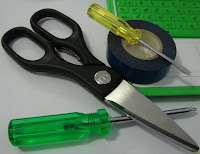 Sparky has been suffering from the dreaded XO keyboard glitch that has seemed to have struck quite a few of the first production batch of the XO-1.

The details from OLPC can be found here.

Sparky is about to head off on another trip to Bowral, so it was decided to see if the keyboard could be fixed before the trip.

The OLPC website now has instructions on how to disassemble just the bottom part of the XO, which contain the battery, keyboard and touchpad, all with really nice hightlighted pictures. This made it very easier, compared to the last time this was attempted. 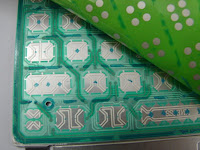 After gingerly pealing back the rubber keyboard, and separating the two membranes of the keyboard circuit, I was met with the adjacent image.

The thing to notice here is that the keys that the specific keys that I was having problems with.. the Left-ALT, CTRL had a minimal amount of the darker green separator 'goo' than the other keys.

This was kind of encouraging, as this has been the problem proposed by the OLPC people, so it was nice to have that positive evidence that I was on the right track and that it wasn't some other issue. 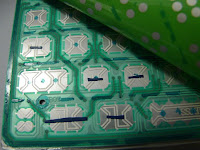 The solution proposed was to put put some fine slivers of plastic electrical tape where the separators should be.

These slivers are about 1mm wide. I used scissors, but a sharp blade I found a small flat screwdriver to be very useful to accurately placing them on the keyboard membrane. I added additional slivers to a couple of other keys that looked like they also might need it (the 'Z' and 'X' keys).

Sparky was reassembled, and so far so good.. all the keys were shown to still work (using the 'test keyboard' command from the boot prompt) and none of them are sticking.. if the problem reoccurs, you'll hear about it here.
Posted by Unknown at 9:22 PM 2 comments:

A pleasent day in the Adelaide Hills...

.. spent in the company of other XO's.

Adelaide held it's second Barcamp event on Sunday (16 Mar 2008), at Bridgewater, in the ITshare rooms near the Bridgewater Mill Winery. There were people working with XO laptops; some tutorials on surface mount soldering, while building an embedded uCLinux board to which to run Asterisk; a huddle around some graphic design work using inkscape; some blogging, an ernest game of chess, or two and a great BBQ lunch. Nearly 30 people joined in the event. Thanks goes specifically to Janet and Kim Hawtin, Lyn Stephens for organising the event and Jennifary Gillet of ITShare for the use of their venue. Everyone brought something techie share though, which made it such a great event. One happy (bar)camper. (Kamping Kaiser)
Posted by Unknown at 4:16 AM No comments:

Sparky: When out this afternoon to a meetup with 6 other XO's. It was great!

Today (Sun, 2 Mar 2008), Adelaide held it's first OLPC Workshop, organised by Janet Hawton. Held in the Education.Au building in Dulwich, this meeting was attended by twelve people who had expressed an interest in the XO laptops in one form or another. Interest ranged from hacking the low level power management chip (and removing proprietary encumbrances) to 'Oooo pretty'.

David is hacking on support for the blind users, and has gotten the XO to talk, with the addition of just two programs.

Kim (with an XO in loan from Joel) was investigating recent issues with wireless interference between the mesh network and local access points.

Karl was doing a audit of the various wireless firmware versions on the XO's available.

Michael was describing his system for reducing Google query times from three seconds to 12 ms, using a combination of a custom protocol over UDP, and lazy DNS with IPv6. Called 'gnugo'l it would be useful to the OLPC project by speeding up the responses to web searches.

The event started off with lunch in Adelaide, before moving out Dulwich. A big thanks to Education.Au for making the venue available. Another OLPC workshop will definitely happen again... so watch out for it.
Posted by Unknown at 1:14 AM 1 comment:

Posted by Unknown at 3:57 AM No comments:

This blog is the journal of Spark the XO laptop from the One Laptop Per Child Project.

This particular laptop is currently living in Mawson Lakes, Adelaide, South Australia and is is the possession of Paul Schulz.
Posted by Unknown at 11:31 PM No comments: